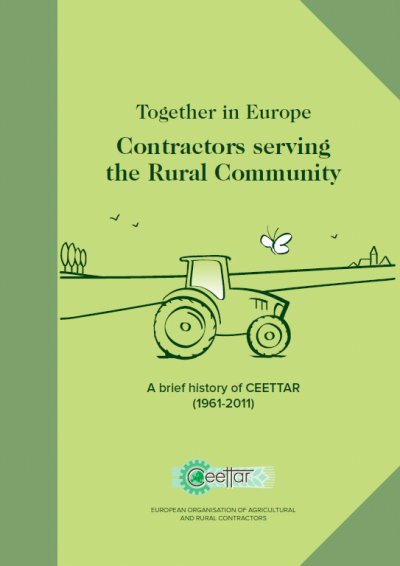 19 July 2018. Agricultural, rural and forestry contractors celebrated in 2011 the 50th anniversary of the international organisation that was formed in order to represent them.

This milestone alsoappeared a good opportunity to produce a retrospective of the history of theseprofessions in Europe, which will certainly be a revelation for some people.

Thefact that the Union Internationale des Entrepreneurs deTravaux Agricoles (UIETA), which predated CEETTAR, wasformed back in 1961 shows that agricultural contractors have long wished tofocus on the basic principles of the Common Agricultural Policy (CAP)established by the Treaty of Rome. The organisations representing thecontractors were accompanied by and sometimes caused unprecedented changes toagricultural and forestry work in the rural sector at national level. At thesame time, this concise, accurate and well-documented account shows that those representingthe contractors have long had clear objectives and convincing visions atEuropean level. Since the 1990s, these objectives can be seen mainly in thestructural reinforcement and increasing effectiveness of CEETTAR.

Itgoes without saying that the growth of CEETTAR has not always been easy and wastied to the meandering development of European Union. However, starting in thesix founding countries and thanks to the commitment shown by people who showngreat conviction, the organisation gradually expanded to include 17 active andobserver members. It also became rapidly clear to all concerned that theproblems facing them went beyond political borders and that any solutions mustbe based on a debate informed by different cultures and visions. In a nutshell,unity must always go hand-in-hand with diversity. With the active support ofall the national federations, CEETTAR is now the recognised voice of almost onehundred thousand contractors towards the Community institutions. Bycontributing to the development of political priorities and legislation, it nowfulfils not only a defensive role but also that of developing rights and a force to be reckoned with when itcomes to advancing proposals.

Moreover,its task has become more complex, as it has to adapt to increased Communitypowers, while taking account of a diversified agricultural, rural and forestry contractorsector, which has gradually come to include all contractors providing vitalservices for the economy and rural life.

Withthis in mind, I feel it would be appropriate to use this anniversary as anopportunity to look to the future. Without doubt, the importance that oursociety attaches to  the environmentmakes it necessary to radically rethink the economy. One of the crucialchallenges is that of making agriculture, forestry and rural development moresustainable.

Itis not simply a question of which techniques are used and has mainly to do withthe actual people involved. Based on their spirit of initiative and knowledgeof the field, as well as their sense of responsibility and service to society,agricultural, rural and forestry contractors â€“ a part of the land-based contractors (LBCs) â€“ have the necessary expertise and dynamic approach, whichmake them an essential lever for a new kind of development, which is bothsustainable for society and economically viable for the rural sector.

CEETTAR Statement on ensuring availability and affordability of fertilizers

CEETTAR OPINION on the Fit for 55 Package

Why do CEETTAR Members care for the Data Act?