SIMA, Paris: "Agricultural Contractors and Innovation: which perspectives with CAP 2014-2020" 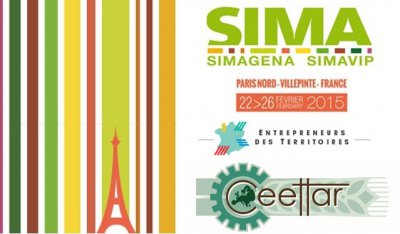 CEETTAR and the French Federation of agricultural contractors have organised a conference on 23 February called "Agricultural Contractors and Innovation: which perspectives with CAP 201-2020" in the framework of SIMA.

After some introductory remarks, in which Gerard Napias, President of CEETTAR, has emphasized the importance of innovation for contractors and enjoyed the presence of foreign delegations (Belgium, Denmark, The Netherlands, Ireland, Italy, Sweden), three other speakers took the floor.

Interaction, knowledge sharing and partnership were the keywords of Pacome Bouna Eyenga's speech, director of EIP-AGRI Service Point "Agricultural Productivity and Sustainability", whose goal is to bridge the existing gap between research and practice.

Next, Dr Bernhard Streit, Professor of Agricultural Mechanics at Bern University of Applied Sciences, presented SOILPROOF, an innovative project for the improvement of soil quality. "We observe an overall soil degradation in Europe, caused by the cultivation techniques", asserted as an introduction the speaker, familiar with contracting companies and is as comfortable with operating machines as with research. "Soil quality is part of CAP 2014-2020, as well as of the European research programme Horizon 2020", proceeded Dr Streit. He advocated a modification of cultivation techniques in order to fight against soil degradation, especially through a reduction of ploughing and cover-crops techniques before sowing.

SOILPROOF projects is a multidisciplinary project that is based on a consortium of 25 partners whose goal is to foster innovation to improve soil quality.  "In order to apply direct seeding without ploughing and on a vegetation cover, we need complex machines" reminded the speaker during a video of the Swiss experience concerning this technique. "Many European countries are already taking part in this project, which had been submitted to the European Commission", explained Dr Streit.

Dr Ulrich Adam, General Secretary of CEMA, European Agricultural Machinery Confederation, stressed that "CEMA contains 4,500 manufacturers with a turn-over of 26 billion euros and 135,000 direct jobs. Machinery investment is directly linked to the agricultural Policy", affirmed the speaker for whom there still is a certain confusion in the implementation of CAP 2014-2020, which is supposed to be less complex and greener. Besides the need for a study that would evaluate the impact of the new political European policy, Ulrich Adam wished to have better access to precision farming through a greater flexibility of the European funds.

26 Apr
EURACTIV Stakeholder conference: Investment in agriculture and jobs; what role for the CAP?

15 Sep
Expo Milano: Innovate to feed the world, a challenge for contractors